There are a large number of ancient temples spread all over within India’s boundary. Most of these temples are made of stone carved architecture. One such temple is dedicated to the youthhood of Lord Śiva located at the foot of Nandi hills in Chikballapura district.

It is a temple of three shrines. The first is Aruṇācaléśwara (childhood of Lord Shiva), the second is Uma-Mahéśwara (marriage of Parvati and Shiva) and lastly, Bhoganandīśwara (youthhood of Śiva).

Jālāndra, Gavākśi, Gavākśa, Gāḷikiṇḍi, Beḷakukiṇḍi are a few of the various kannada terminologies for a window. A window is an open space in the wall of a building structure.  The elemental purpose of a window is to admit light and provide ventilation to the inside of an enclosed sphere. It is considered as the eye of any sheltered construction. Through this aperture one can view the activities of the exterior of the wall without actually stepping out of the building. There are innumerable kinds of window designs popular all over the world. The various factors like the region they are in and the taste of each individual are the reasons for their variegated patterns.

Windows are very frequently trimmed in many of India’s marvellous architecture as a decoration along with its natural necessities. Some have simple window grills while others are artistically carved with touch of aesthetics.

There are eight Jālāndras around the afore-mentioned shrines. Oh! What stunning spectacle are these creativities! The think-tank and the handy-skill of the highly qualified veteran sculptors of the by-gone era (under the Chola or Kalyana Chalukya rule) are to be revered with awe.  Yes. Indeed! Standing motionless in front of this wonder wall, permitted my mind to float back to that era of the super sculptors of this art wall. Ah! It is definitely not easy to comprehend their minds. Watching intently, chiselling sounds could be heard and shoving away of the excess stone to make hollow in these walls could be envisioned to present the sculpturally well designed windows.

Moving in a clockwise direction around the temple, I came across this breath-taking grilled wall and was awe struck. How highly imaginative and innovative were those artists! It was simply WOW! Here is a humble venture to describe this intricately carved image. 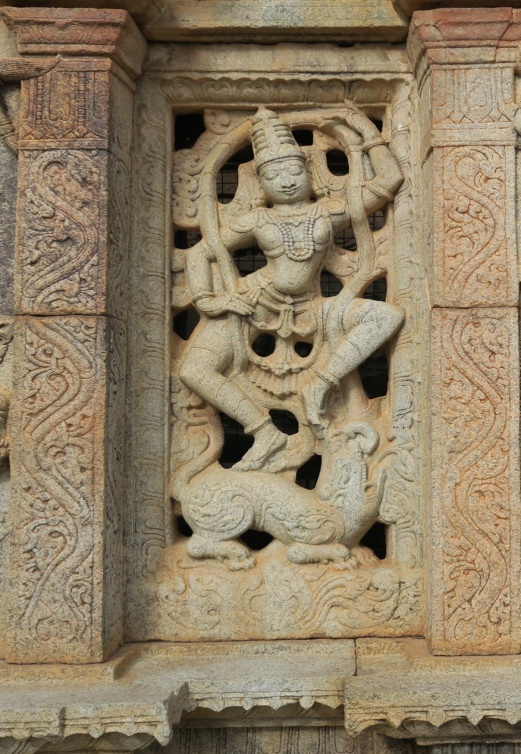 This dance-like postured image of a male figure (appears to be a celestial being) has based his feet on the Makara (crocodile). This could be only a creative idea of the sculptor and may not be part of the actual dancing movement in his mind as it is tough to perform on the back of a slippery live crocodile. Well, I would like perceive and project this as a dance image – firstly, for the simple reason that the figure seems to be in a look-alike dancing stance and secondly, belonging to the dance arena, I try to visualise dancing motifs in most sculptures.

The right foot rests on the back of Makara in an Agratalasañcara foot position while a part of the left foot big toe supportively is placed (Sucipāda foot position) on the nostril of the crocodile. Tickle! Tickle! Irritated with this, the crocodile might now fidget and drop the person who caused the tickle and exhibit a humorous dancing movement. Joke apart, this complex precarious position can be imagined to be a dancing posture only in animation series. The whole attitude of the figure seems to be as graceful as the flowing water. The legs are posed in śāiva sthāna, while the right waist is in Udvāhita(raised) kaṭi giving it natural exquisiteness. The shut eyes depicting the depth of involvement in dance highlight the Sātvika element. The mark on the centre of the forehead is embossed and the moustache adds to the touch of masculine expression. The right hand is placed on the right thigh with mannish charm while the other is alluringly raised to the level of the head on the left side. The pant type Dhoti (Indian male costume) seems to be tightly hugging the legs while the fan-like attachment reaches down to the knees. A gorgeous wide girdle goes round the waist. A tube like ankle ornament and an anklet like feet jewellery adorn the ankle and the feet respectively. The long chain beautifies the chest while the shoulder ornament called the Bhujakīrti on the shoulders goes across the neck which has an attachment that is pulled across the lower chest region.  The three tiered crown and the Karṇapūrṇa (total ear ornament) also bedecks the image. Cylindrical shaped bangles are worn one on each hand around the wrists. Adding elegance to the figure, a thick creeper is drawn around it. The attractive carvings on the crocodile and the window frame do not go unnoticed. Right?

Now, what has made this image special or different from other sculptures on the walls? Well, the cavities created in the wall to make an ornamented window have highlighted this aesthetically carved sculpture.

Salutations to this tremendously accomplished sculptor!

Acknowledgement: I extend my profound gratitude to Dr. Manorama for timely guidance in writing this article. 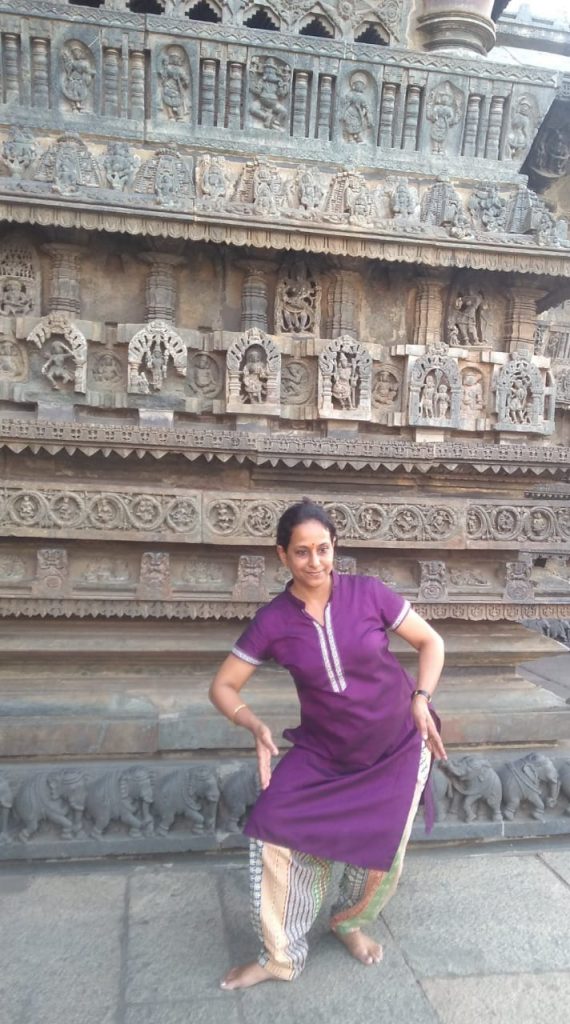 Padmini (Rao A) Kumar, a B.Com graduate pursued her career in dancing. Completed Vidwat in Bharatanatya in 1986, MFA in Bhraratanatya in 2010 and MPhil in 2018. Currently learning dancing aspects of Natyashastra from Dr. Shobha Shashikumar and pursuing dance based research. Running a dance school and a panelist in the dance examination board. She is also an Intern in Nrityashilpa Yatra- a Temple study programme conducted by Noopurabhramari.